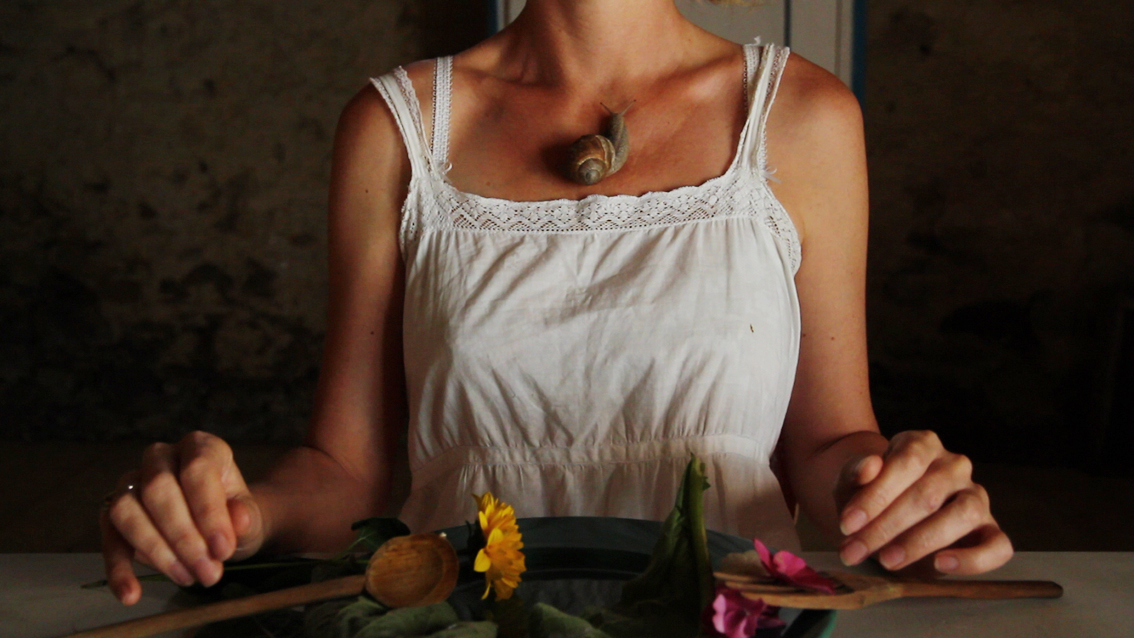 A soup for Ophelia: A scenario for a short film

She is wearing a moist, velvet green dress and large heavy jewels of glass and copper.

Her face is powdery white.

She makes herself uncomfortable at the table, by sitting too close the edge of the chair, leaning forward, elbows resting in front of her, where, a little to the right, a jar of milk stands. In the centre of the table is a small plate of jelly beans, like jewels of different colours.

After a moment’s wait a waiter enters and places a large bowl of soup, made of clear glass, in front of the diner. The soup itself is quite transparent, emerald and cool.

The diner studies the content, then examines her hands. Her nails are painted violet. On her wedding finger is a ring made of green bottle glass.

She taps on the sides of the bowl with her nails. She then lifts her hands above and slowly submerges her fingers in the soup and leaving them there for a few seconds, she feels her way around the pond.

When she draws them out again, ceremoniously and dripping, we can see she caught some rice noodles, while few violet leaves and cucumber slices are stuck to her fingers too.

A female voice can be heard drifting in through the semi open window, together with a smell of mud and moist earth and children’s voices.

A sound of breaking glass makes her lose her focus and turn around sharply. Nothing obvious was broken.

She pulls off her ring, slowly and purposefully and drops it inside the soup.

She then takes off her necklace with great care and lowers it into the soup.

Few hair clips are added too, making her hair loosen around her face.

We see her hand smooth over her scalp – an act which produces a sound of small electric sparks as the nails encounter the texture of the hair. Her movement carries on into a gesture of picking up the jar of milk, to take three slow gulps.

Having put down the jar (traces of milk on her upper lip) she takes out a rouge from her small handbag, together with a bulbous brush, and she dabs her cheeks, making her pale face appear unnaturally flushed. The red powder leaves traces on the table.

She checks the results of her beautification in the soup, as if it were a mirror.

Now playfully she picks up a red jelly bean with her thumb and index finger and places it between her teeth. Then eats it. Two more follow (green and then yellow). She throws the reminding 4 in the soup, one by one, and watches as they float.

Now the diner leans forward, over the bowl of soup, like balancing over a precipice. Then slowly she lets her head drop inside the soup, while her arms fall lifelessly beside her, as if suddenly drifting off to sleep.

From “Musings of an Imaginary Cook” , an onging project by Tereza Stehlikova

2 thoughts on “A soup for Ophelia”