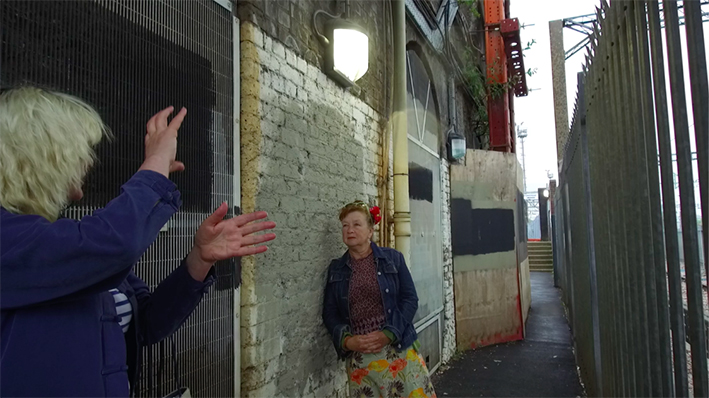 On Friday I had the pleasure of meeting up with some of the members of the Willesden Junction Poets’ group, brought together by Rose Rouse, for a project supported by Brent 2020 culture fund.

It’s been a joy drifting along the sprawling pathways of Willesden Junction, experiencing the place through their eyes, as various plants and fruits trees were pointed out, as well as other small features I have never quite paid attention to, despite my frequent meanderings there, such as the leaded windows at the top of the old ticket office.

At first we met Keira, the wonderful typeartist, who creates intricate observational drawings by typing on her typewriter, which she carries in her backpack. We bumped into her just at the start of the sniper’s alley: She was dressed in a metallic silver-blue jacket, sporting a mask and sunglasses, so that she appeared like a character from a science fiction story. I was intrigued, she was on a mission that felt mysterious yet incredibly particular.

Having left Keira to do her futuristic experiments in her own creative solitude, we headed for the southbound platform, where Sue recited her poem, defying strong winds and the noise of a train, pulling into the platform. 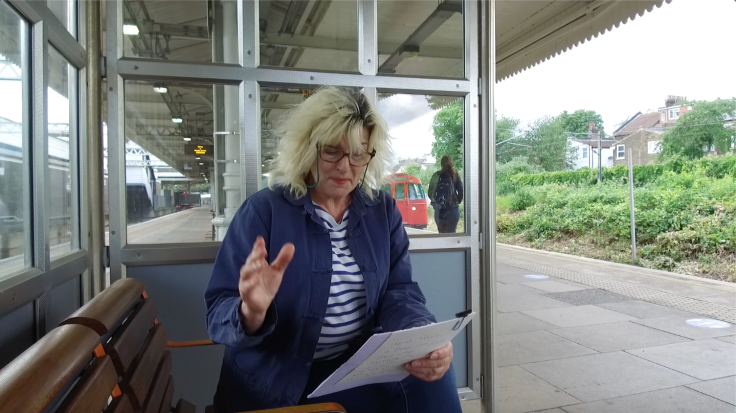 From high above we admired the hybrid architecture of the networks, patched together over the past decades into an unlikely performance stage, lined by spears, crisscrossed by wires, softened by horsetails and a plant I learnt is called shepherd’s purse.

Apparently just after it was built, in 1867, the labyrinthine Willesden Junction was called The Bewildering Junction or The Wilderness. While it has apparently been simplified since, it strikes me that not that much has changed at all. 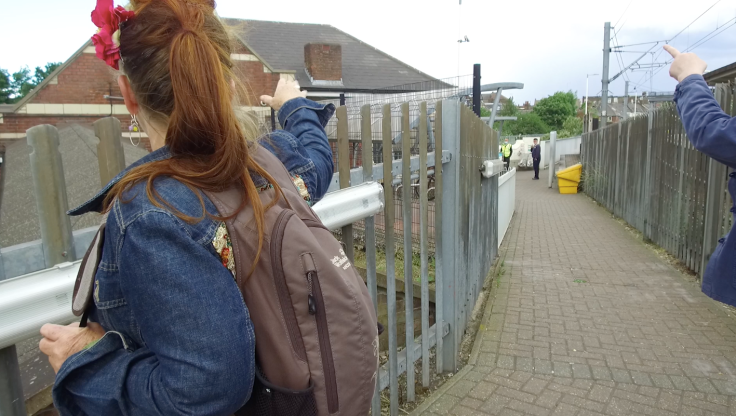 Rose reminisced about her film Dance Willesden Junction, as we stood under the bridge, where one of the scenes of the film played itself out, a joyous celebration of life and the area, performed in red to the sound of music, blasting out of a small portable stereo, literally animating the place.

It was just there, in the narrow passageway, that the rain caught up with us and as we stood there, admiring the textures, the lines and fences and mysterious cat flaps in unlikely places, while the few passersby were forced to squeeze past us, making this the perfect spot for conjuring up curious encounters. 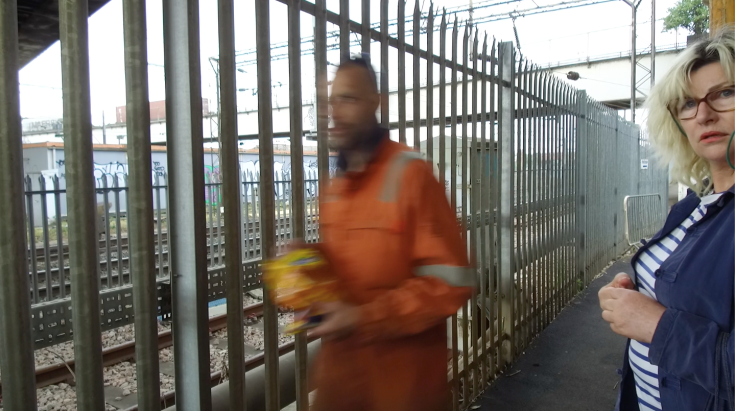 In any case, these are just words that describe what happened, but really the main impression I was left with is a sense of transformation, something subtle, real, yet hard to describe, a sort of change in atmosphere. 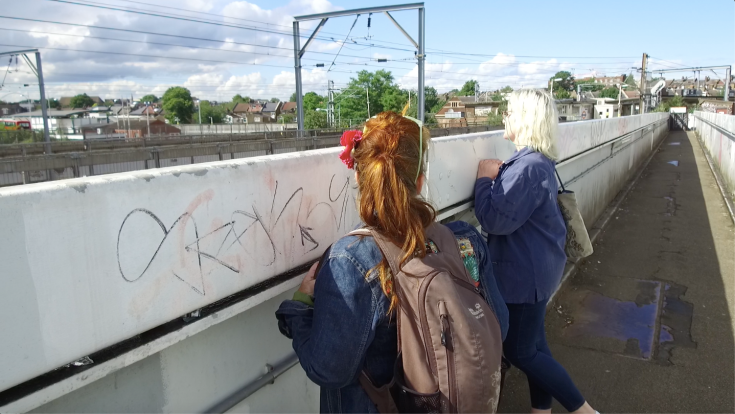 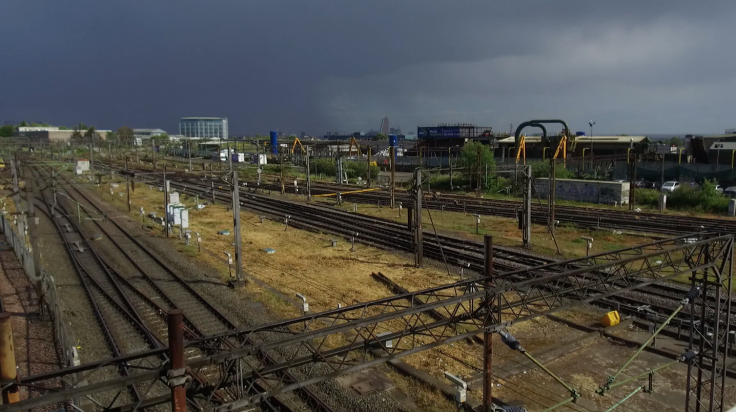 While far from pure and welcoming, hiding piles of rubbish and hordes of rats, piss stained and filled with noise of screeching trains, its skies polluted by the fumes from industrial estates, this junction begun to ooze some of its unique sense of wonder, haunting us for ever more, as we felt it whistle and move in wind, changing its moods with passing clouds, becoming responsive, receptive, alive.

It deserved this attention that we gave it and not only that, it rewarded us for paying it.

Our Willesden Junction has suddenly become iridescent, little bit like Keira’s metallic space jacket. It was radiating some strange inner glow, perhaps mildly toxic, but beneath that toxicity it felt fresh and nourishing, as it begun to resonate and hum with far flung valleys, where distant relatives of these apple trees, blackberry bushes and wild flowers also grow, only blessed with more clean air.

This hum of the Junction’s song joined with the thoughts of John Berger, who was here too, as an art student, making his drawings of the marshalling yards in reverence, over and over again. According to John, the tracks then were “the colour of the stringy ribs of cut stick of rhubarb, placed side by side, pointing to the horizon, where they stewed.”

It occurs to me that our apples and cherries and wild berry jams in the midst of this industrial land are not so much whims of fancy, little eccentricities on our part, but are in fact part of a noble tradition of finding living threads and sprouting connections, weaving a meaning from the matter at hand, the land, from things that matter to us, from rhubarb, shepherd’s purse, from herb robert, from type writers that no longer write words, but conjure up images, stories, worlds. 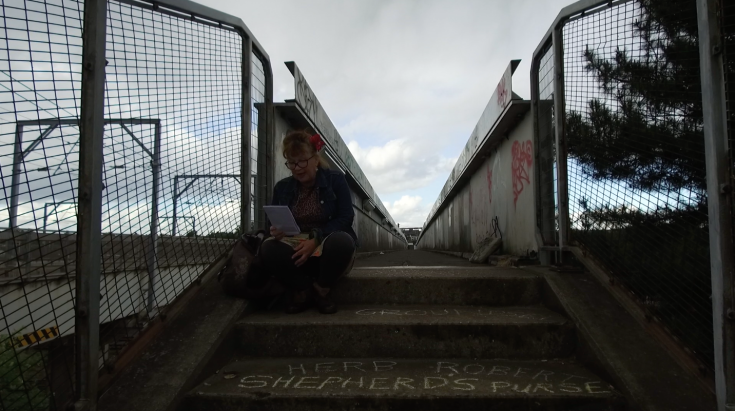 Thanks to Rose, Sue and Keira

2 thoughts on “Fruits of Willesden Junction”