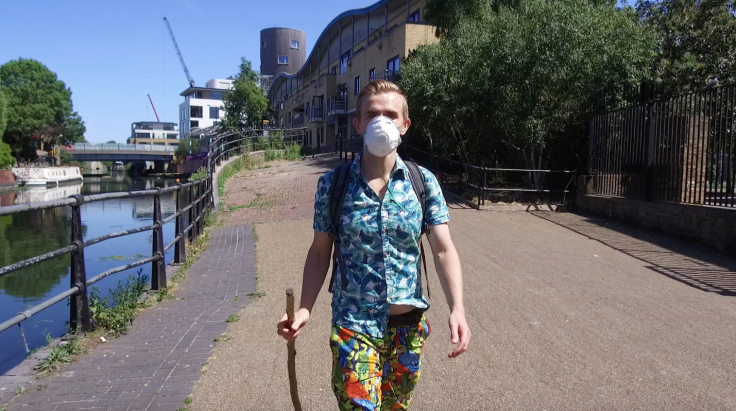 There is something about those sweltering hot days, as the air stands still, enveloping us by a sense of unreality or hyperreality, like moving around one of those pictures in “frozen time effect”. Something about the different time scales being out of synch with each other.

The whole experience of walking with Steve yesterday felt like this, the kind of lucid dream state where one is not quite sure where the inner world ends and the real one begins. That rather familiar “wormwood state”.

Plus of course the added unreality of the ongoing (and apparently loosening) lockdown. We may be fooled into feeling like everything is ok again, but very quickly the wandering eye is reminded all is not as it should be: The masks, the suspicious glances, the detours, the creeping tensions between passersby…

And yet, Wormwood absorbs all this into its ambiance…together with the smoke of nearby fire, the burning fumes of incinerators that are feeding the omnipresent air pollution, while the green foliage hides discarded beer bottles and plastic bags that sparkle in the sunlight like some strange jewels.

Wormwood is a mirage of a natural wilderness, superimposed upon industrial city zone, or maybe vice versa. In any case it is a pleasantly confusing state, this wormwood… The waters in the canal during lockdown are deceptively clear, so pure in fact one could almost be fooled into taking a plunge…and risk getting entangled in the weeds that hide further buried treasures.

At this point, let’s note here that Steve promised me that next time we meet to film, he will jump in, not for money, but for art. Our art! To know Wormwood, one must immerse fully, while making sacrifices. 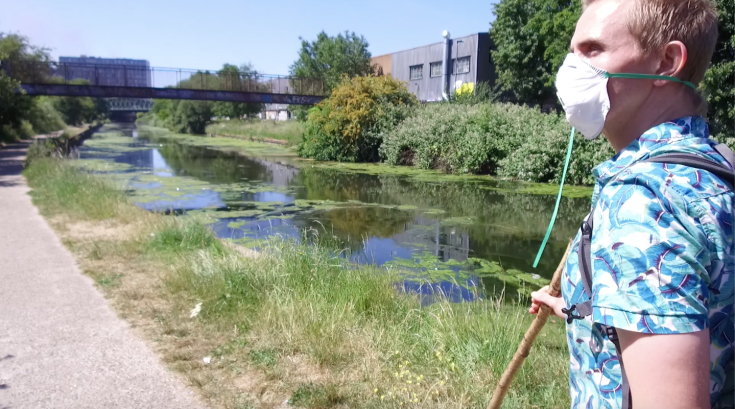 The view from the bridge is equally hallucinatory…Over there a building seems to have sprung up in front of our very eyes.

The trains radiate an apocalyptic glow. It hurts the eyes.

The single contrail cuts across the looming cranes.

All is stillness, behind which some strange forces are gathering.

Meanwhile on earth, the vegetation is sprouting, taking over the human habitat, while a man behind an iron fence prepares his barbecue, oblivious.

Steve understands that to feel at home here, one needs to wear a mask, carry a stick and be extremely polite to all passersby, especially the angry cyclists who exert their dominance by ringing and shouting. 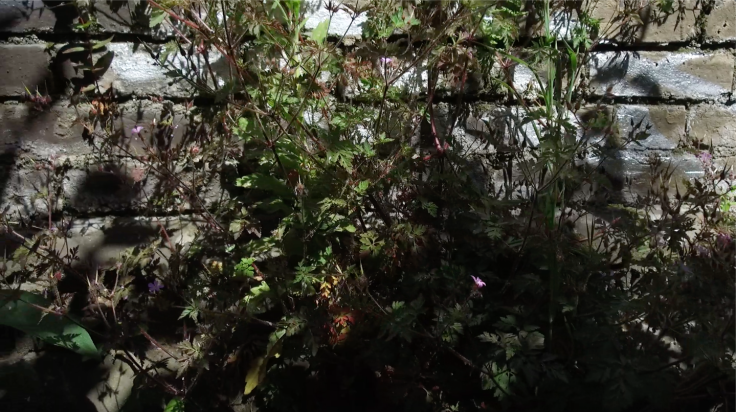 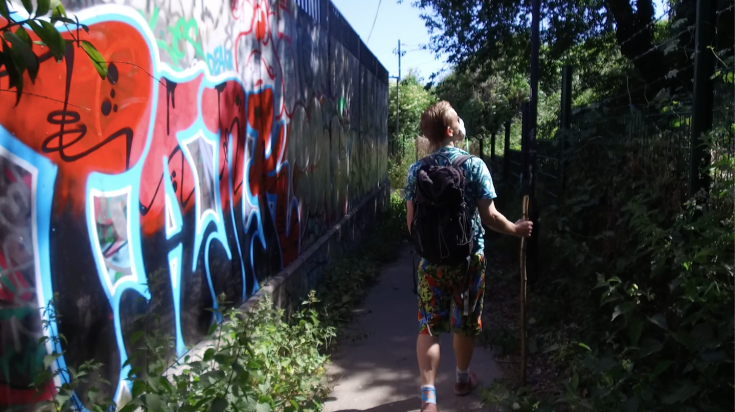 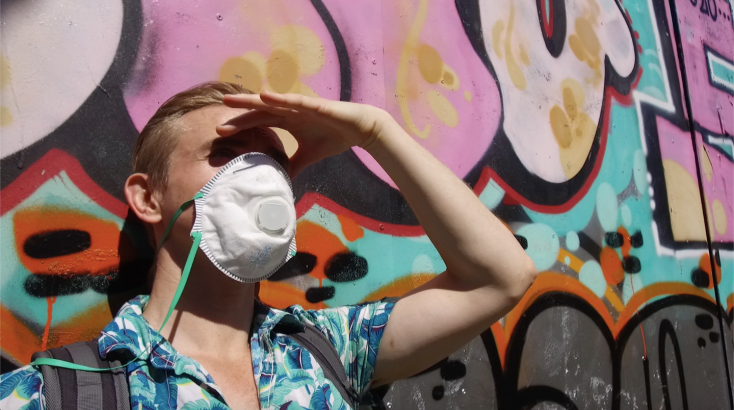 Briefly, we stopped to sunbathe in the toxic wormwood sun, then hurried on to the Cargiant.

The Cargiant Diner has been turned into a red light district, a hand written sign indicates. Things and places have a tendency metamorphose into other things in Wormwood.

That’s why Cargiant has transformed into an Argiant now.

The C has gone elsewhere. I looked for it in the undergrowth, we both searched, because Steve hoped to take it home and use it as a seat, the perfect seat for a poet, who used to be a bouncer. But we never found the C. Somebody must have cleaned it away. 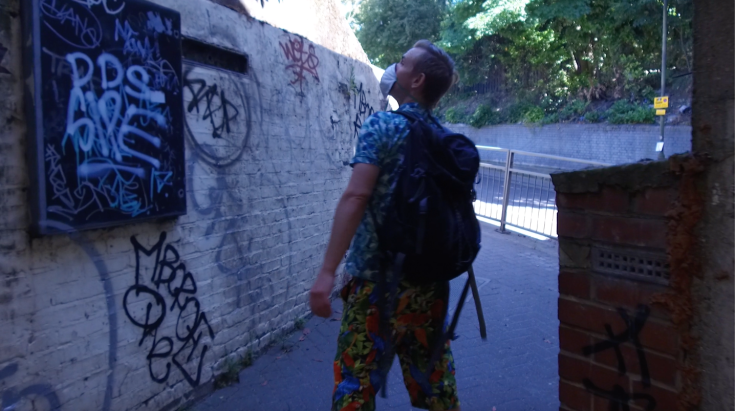 We said it before, the seeds of the unimaginable futures can always be found way before they become realities (or new normalities). This mural is a proof. Our film is too. Now that the future is our presence, we can be sure the future futures are already creeping through these cracks in walls, hiding amongst the poppies, behind the masks of strangers.

We record them, often without knowing, while walking, making our endless film. They peek at us through synchronicities, in strange patterns that are usually spotted retrospectively, often as I am writing these ideas down, or as I edit the footage. Our openness to the process and lack of clear goal helps us enter the before-mentioned “state of wormwood”, which as you know by now, is not a political state, but an emotional one.

These futures that can be noticed, if fully attentive, often seem wild, strange, even shocking, until they start to be called the new normality. Yet they are never quite new, because we dreamt them in our collective dreams long long time before, even if we don’t consciously remember. Like E M Forster would have done, when he wrote The Machine Stops.

Wormwood has much to teach us about future new normalities, as it waits here, brooding, bracing for its ongoing transformations. 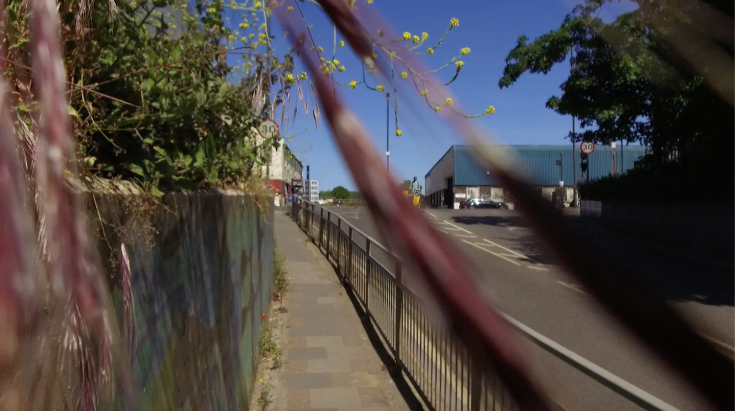 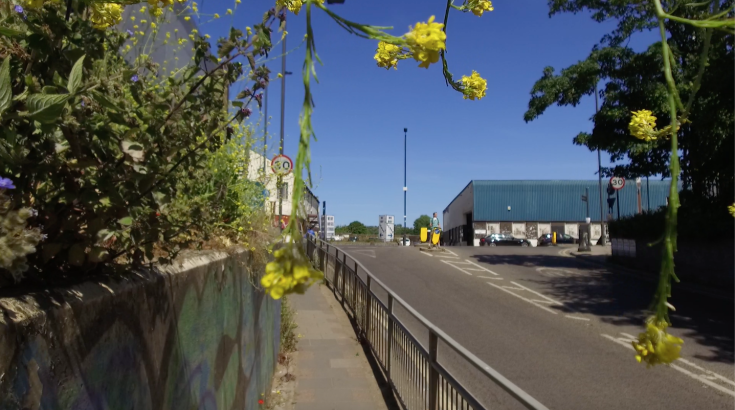 Image and text by Tereza Stehlikova, May 2020