Sense of Iceland
Multi-sensory banquet experiment
based on William Morris’ Journey to Iceland, 1871/1873

Conceived by Tereza Stehlikova and developed in collaboration with Charles Michel. 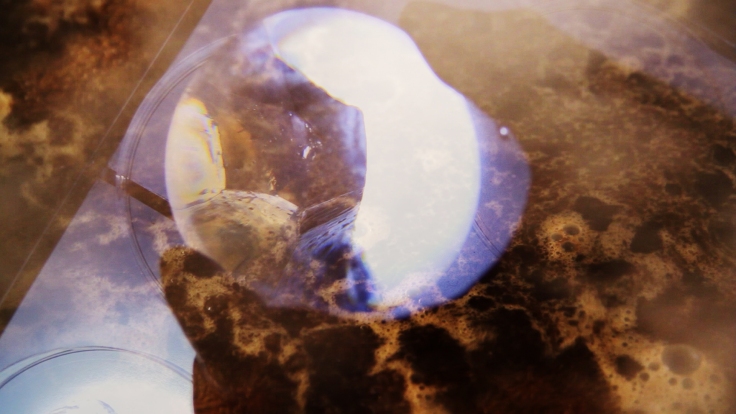 The event has been conceived and initiated by myself, an artist and researcher based at the Royal College of Art, and developed in collaboration with Charles Michel (cook and researcher at Crossmodal Research laboratory, Oxford), as well as a team of dedicated collaborators from various backgrounds and with different professional expertise.

It was positioned somewhere between being a banquet, theatre performance, and a workshop/experiment. My aim was to create, on one hand, a highly imaginative and complex environment for experiencing food, and on the other, to use food as a means of exploring perception and taking us on an imaginary journey. I decided to base the event on William Morris’s journey to Iceland, in 1871 and 1873, seeing how this experience could be translated into a multi-sensory dining event. Rather than a representation of the journey, the event only evoked certain elements and landmarks, in order to trigger the imagination – a dream of a landscape by those who perhaps have never been there.

The performance was the first one in what is planned to become a sequence of experimental events, poised on the exciting boundary of art and science interchange, feeding in both the recent research into multi-sensory integration, the philosophical debate going on at this point in regards to the interaction between our senses, and the tradition that stretches back to the Futurists, and also much beyond, into time of Renaissance and even further back still.

I realised that as an artist I have the privilege of experimenting without the inevitable constraints imposed on science. I tried to use this privilege to create aesthetically stimulating conditions for intuitive thoughts and ideas to spark, perhaps also inspiring a scientific or philosophical discourse.

In order to achieve a greater complexity, I involved artists and experts in unique fields, i.e. sound artists, perfumers, set designers, lighting designers, florists, food historians, performers, etc. to help me explore the potential of stimulating the senses in an aesthetic but also experimental context. Charles Michel, who is working closely with Professor Charles Spence, is experimenting with particular combinations of flavour, texture and sound for instance, the results of which will also be gathered and analysed.

Beyond it being an experiment in itself, the idea was to also create a kind of workshop environment where some of the ideas discussed in theory can also be tried and tested in the wild, rather then a controlled laboratory environment. The guests invited have therefore been selected very carefully, and consist of experimental psychologists, neurologists, art/science curators, artists, historians, and finally food writers/critics and other journalists.

All the proceedings leading up the event have been recorded. The event itself was filmed in detailed, with the help of two cameramen. I am now working on creating a short film based on the event, one that blurs documentary and fiction, subjective experience with facts, reality with dreams.