In my last post I discussed some of the processes behind the concept of Tangible Territory within Blue Hour immersive installation, part of 36Q within Prague Quadrennial 2019.

This next post reflects on what happened once Tangible Territory came to life, animated by human interactions.

From the beginning, TT approach has been about openness, process and power of imagination. I wanted to create multi-sensory mini landscapes for people to explore and interact with, which would transform with each new encounter, rather than stay fixed. This openness to transformation came both in terms of the collaborative element, which, within our group, has been very natural and fluid, as well as in the final experience of the artwork: an invitation for people to touch, move and alter these miniature landscapes, with various tools, or their bare hands or feet.

In order to inspire this unique form of “animation”, we had 3 sensory guides (Amy Neilson Smith, Katja Vaghi, Kerryn Wise), whose mission was to instigate a playful dialogue with the space and the materials and objects within it. Over the next days, there has been a fascinating evolution of these interactions, as the performers learned to work with the space and its elements. 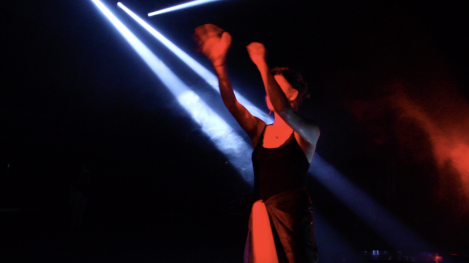 One of the most fascinating things emerging from Blue Hour 36Q Prague Quadrennial were the encounters between latest technology and the human soul, which is in some sense still roaming the wild forests of prehistoric earth, governed by irrational impulses and powered by archetypes of the unconscious. While the VR experience freed us temporarily and fleetingly from our earth bound bodies, in the world of tangible territory we looked for a liberation through the opposite, exploring the limitations determined by our physicality. In my view, whether it is the latest technology or a simple analogue tool, it’s our human imagination and our embodiment that determines the power and emotional depth of our experience.

Having recently also been pregnant with my second child, I have been fully aware of my own changing body, both from without as well as within. And as in the discussions with my friend and colleague Philosopher/Cognitive scientist Anna Ciaunica, whose own work explores questions of embodiment as well as depersonalisation, it seems that this biological fact, the potential of a woman to carry and give birth to a child, gives us women a more direct access to a more embodied type of consciousness (I am sorry Anna if I am not too precise here). Was it just a chance that TT team, one engaged with messy, organic world, subject to decay, was made of 11 women and only one (very open) man?

In the light of these semi-formed thoughts, I felt a sudden need to question our use of technology for the sake of technology. As if technology, especially the latest, more “immaterial” or “abstract” version of it, became the manifestation of pure thought, unencumbered by our physicality, an aspiration to immortality, or even a means of escaping our “shameful bodies”, which are subject to transformation and decay?

And yet, no matter how much we try, the body defines all our experience and is the basis of all meaning.

During the process I was also reminded of Jan Svankmajer’s point about our western audio-visually oversaturated society, whose sense of visual aesthetics has become anesthetised. Are we threatened by the hedonism of touch? Are we terrified of what “primitive touch” may unleash in our bodies? What sense of freedom can be found, outside of the constraints of visual aesthetics? Did some of this contribute to the conflict between the visual aesthetics of Romain Tardy, the lead artist, and my own, created for touch, yet crossing into the visual field, coming to a head just a day before the opening?

In some sense this clash felt like the manifestation of Svankmajer’s point about our society, with its hierarchy of senses, where proximity senses of touch, smell and taste our considered inferior, not worthy of art. 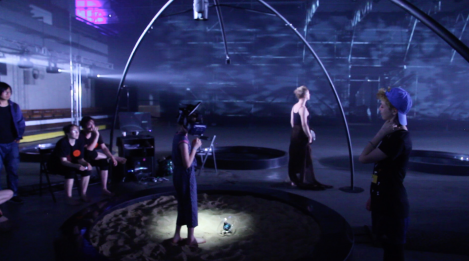 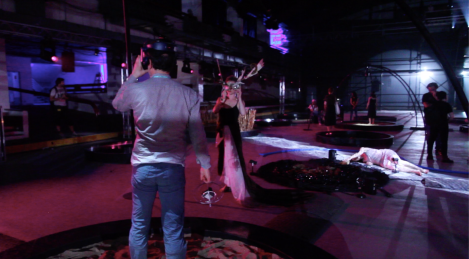 When going through the footage I shot during the running of the show, what became apparent to me is the basic human need to “connect” with others. While technology works so wonderfully at allowing us to connect at a distance: through internet, social media, phone etc., it can also isolate us from the here and now: from being fully present to the infinitely complex, multi-facetted connections born of proximity to other beings and the surrounding environment, with all our senses alive.

One memorable experience of being immersed in Blue Hour, was walking with Katja Vaghi, who was wrapped in a blue tube , listening with one end to somebody (a stranger) at the other end, whispering little fragments to each other. At one point, we even sent a breath to each other through the tube, and it was disturbing and exhilarating to feel this warm air coming through the tube. This analogue dialogue, so basic, yet in some sense still directly linked to our intention to communicate, reminded me that we must make sure that technology serves the human, rather than dictates our reality.

How to conceive of the next collaborative project that may explore some of these questions in depth? 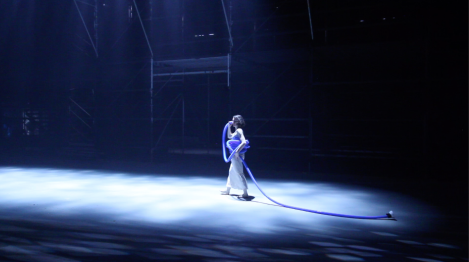 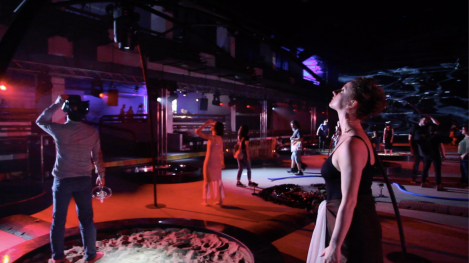 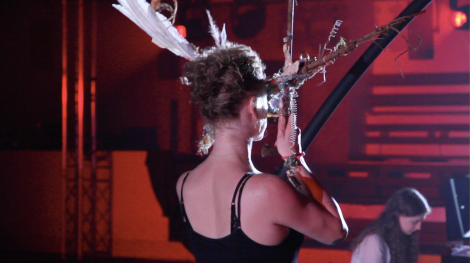 Images and text by Tereza Stehlikova 2019