This year seemed unlikely at first: from the constraints of our London abode, with no outside space, just a tiny flat where not even windows can be properly opened, the idea of South Bohemia, with its open landscape, became utopia.

But as the lockdown rules across Europe started to relax, we took the opportunity to escape the city: in our small car we drove across to Dover, then France, Belgium, Germany and finally arrived in the Czech republic, where life feels almost normal. In particular here, in the countryside, where the rest of the world seems far far…

I am beginning to appreciate now that when I arrive here, I need to begin the filming of 4 generations soon enough, in order to synchronise my inner rhythm with the place, to feel rooted. It’s like the ritual of filming has also become the ritual of being at one with this place. The landscape, its genius loci, has become inseparable from the people and their story.

This time it became clear at the start that the theme had to be roots. Literally and metaphorically (but the metaphor is not really a metaphor, all roots are real). And with roots also the idea of uprooting, planting, root vegetables, nourishment.

In front of my inner eye emerged images of soil, of hands pulling out roots, vegetables…earth as the life giving substance, moist, nourishing, full of minerals, living creatures, also where we all end in.

I became so tired of the screen, of the world captured and imprisoned inside the computer, in my unreality of London, which became anaemic behind the mask, that it seemed vital to get to the basis: soil and roots.

But before taking this idea further, I begun with a simple ritual of exploring the bond between generations, the invisible core that binds us, the generations, no matter how much we sometimes try deny it, by distance, by lack of touch, by focus on our individuality. This core, this thread is made of organic matter, sap flows through it, it is as strong, as visceral, life giving and also as fragile as a root or as our bodies are.

Like flowers and plants, this organic stuff that we are made of, is so wonderful because it comes under the condition of time: it is born, must grow mature, then old, it must wither and die and become absorbed in the cycle of life. A beauty is present in each of its stages.

Here in the landscape this merciless truth feels more acceptable, and only that, it feels right and denying it silly, immature, ridiculous.

Yet the core that binds us, is timeless, a channel in which the force of life flows and is carried beyond the individual, in an unending process, the mitochondrial DNA passed down from a mother to daughter, across expanse of centuries…

So I created a small ritual to start exploring some of these ideas: first, as is often the custom, we adorned ourselves in our “traditional costumes” of undergarments found in the old farmhouse, then wild flowers. The moment of getting ready together already is part of the ritual.

I purchased a red ribbon in the nearby small town. I asked for 6 meters but the nice man behind the counter only had 5.5 m, so I said that was ok, it just means we have to be closer.

After getting dressed, we tied ourselves together and proceeded on a small “procession”, on the threshold of a forest and a meadow. It was hot, the sun came out and disappeared behind clouds quickly. The ground was prickly, there were spiky chestnuts and wasps and fruits as obstacles for our bare feet.

The flower garlands on our heads attracted bees: these buzzed around us, while the flowers came heavy with fragrances, each bringing its own emotion and memory. It was hot and heat felt good, as did the landscape and our presence here. 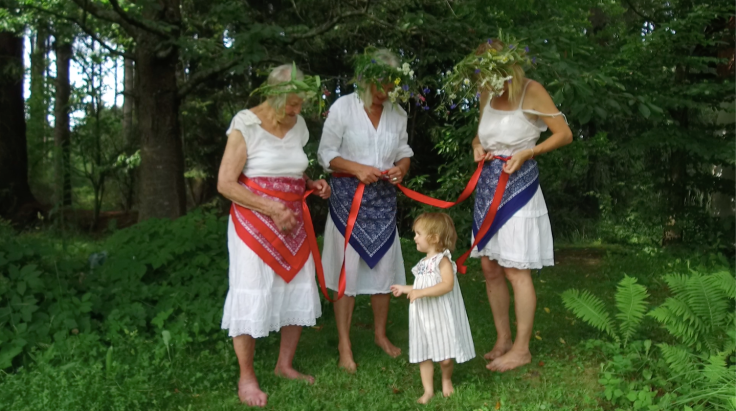 At the end, we gather below an old cherry tree, in a circle. We missed Anna, who is now replaced by Clementine, but only partially, as she is of course an integral part of 4 Generations.

My grandmother is now 95. An excellent age, even for a tree. Our roots feel reassuringly solid. 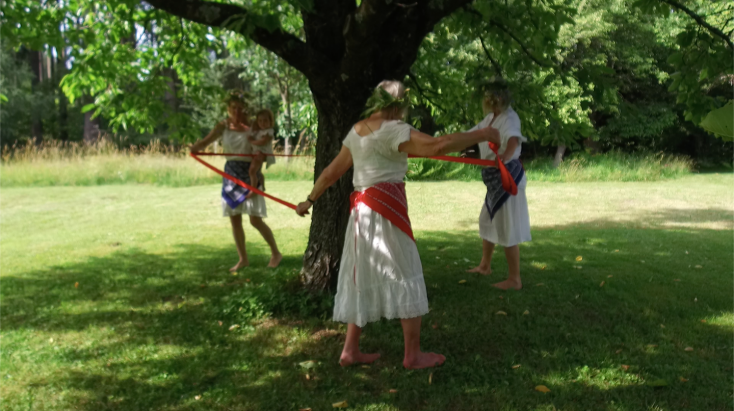 The next stage of this exploration will be a feast for 4 generations, with root vegetables and soil and more soil. Coming soon!

3 thoughts on “From my roots: part one”